Welcome to the Official site of Robby Krieger. Click the below links or scroll down to see Robby’s Biography, view Concert Dates and read the latest updates from Robby’s Facebook.

Robert Alan Krieger, born January 8, 1946, in Los Angeles, is a musical performer and The Doors guitarist. He attended UCLA. “The first music I heard that I liked was Peter and the Wolf. I accidentally sat and broke the record (I was about seven). Then I listened to rock ‘n’ roll – I listened to the radio a lot – Fats Domino, Elvis, The Platters.

“I started surfing at fourteen. There was lots of classical music in my house. My father liked march music. There was a piano at home. I studied trumpet at ten, but nothing came of it. Then I started playing blues on the piano?no lessons though. When I was seventeen, I started playing guitar. I used my friend’s guitar. I didn’t get my own until I was eighteen. It was a Mexican flamenco guitar. I took flamenco lessons for a few months. I switched around from folk to flamenco to blues to rock ‘n’ roll.

“Records got me into the blues. Some of the newer rock ‘n’ roll, such as the Paul Butterfield Blues Band. If it hadn’t been for Butterfield going electric, I probably wouldn’t have gone rock ‘n’ roll.

I didn’t plan on rock ‘n’ roll. I wanted to learn jazz; I got to know some people doing rock ‘n’ roll with jazz, and I thought I could make money playing music. In rock ‘n’ roll you can realize anything that you can in jazz or anything. There’s no limitation other than the beat. You have more freedom than you do in anything except jazz – which is dying – as far as making any money is concerned.

“In The Doors we have both musicians and poets, and both know of each other’s art, so we can effect a synthesis. In the case of Tim Buckley or Dylan you have one man’s ideas. Most groups today aren’t groups. In a true group all the members create the arrangements among themselves.”

Most people know Robby Krieger as the consummate music artist in his role as former guitar player and songwriter of the legendary band The Doors.
What shouldn’t be surprising is that creativity has no boundaries and many times artistic expression will spill over into more then one medium for the artist.
Robby Krieger is no exception as demonstrated in his creation of a collection of spectacular, never-before-seen works of art…now available to art lovers and Robby fans.
Now, through the charity services organization, ART FOR A CAUSE, limited edition, giclee prints of his beautiful paintings will, for the first time, be available to the fans of Robby Krieger.
“I hope my paintings brings joy and love to art lovers for many years to come.” – Robby Krieger

Click here to visit the “Art For A Cause” site. 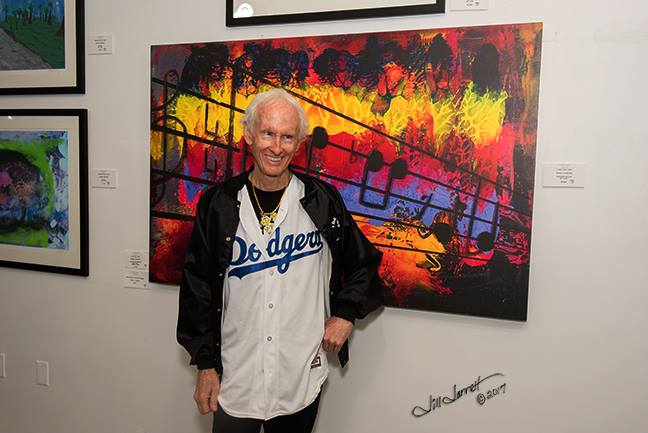 Robby you, George Harrison, Jimi Hendrix and Eric Clapton are some of my favorite late 60s guitarists

I so hope Eddie was able to see this before he left us. I think he would have been thrilled.

God’s Love to your Family, Robby 😎👍

A legend for another legend. The Doors is my favourite band and because of Robby I don't use a plectrum to play guitar because I'm a big fan of his finger style

A legend paying a respectfull tribute to another legend!🎸

Like that Strat in the back ground. Never saw you play one though.

You are great Robby!!! 🎸 thanks for sharing 🤘

You are cool Robby!!!

Thanks for sharing Robbie that's cool

Happy Birthday! We were lucky enough to see you guys play at the Peppermill in Reno. It was the best concert ever!

Happy Day to Phil. Love him.

Happy Birthday from Minneapolis Phil! Hope to see you all back at The Dakota again soon! Stay well!

One of an amazing kind right there! Happy Birthday my friend ❤️

HBD, PC! Wishing you many Happy and Healthy returns to this occasion. You were always so fun to listen to!

Enjoy all the love coming your way today - happy birthday

I saw you in Porto Alegre Brasil!

There are two ways to watch/participate:

1) Watch for FREE on YouTube using the following link, which will go live on Saturday: www.youtube.com/channel/UCOxG6tnS4OiOiPJEbUdRi-A

2) Download the Multiverse app on your iPhone, Android, or Oculus Quest. NOTE: There is an $8 fee to use the app. Once in the app, Reverbia Mainstage location is 3:45 & Esplanade, and the Earth Jam is 10 & G (these are street addresses on the app). I know this all probably sounds like gibberish, it’ll start to make sense as you explore the resources and the app.

If anyone is interested in joining the WhatsApp groups surrounding the event you can join through this link: chat.whatsapp.com/DXfakVHzi7542S5E2YCcAa

Once again, you can watch this on YouTube for free, but the app gives you a heightened experience and has interactives.

Hope to see you all on Saturday!

I am so far away😔

I watched The Doors Isle of Wight last night.Robbys playing stood out alot.

so Obsessed Wth Not to touch the Earth

Fuck you Sean you worthless piece of shit,isn't it time you go to the woodshed a feed those mongoloid kids of yours oh wait, is that were you stash your cousin?Fuckin imbred

For those of you waiting for Robby's Virtual Burning Man performance tomorrow, here are some photos from the rehearsal! Enjoy! All photos by Robby's personal photographer, Jill Jarrett. ... See MoreSee Less

Always the most beautiful and unique photos .... you've got the special touch! <3

Jill, what fabulous photos! Love the profiles and backlight. You planned and worked hard at this. Congrats!! 😎🎶

Spectacular photos! What creativity & talk about being able to capture a moment. Fantastic!

Great to see that you still do public shows. Many thanks for the great music over the years. See you later today 🙏

Way to go Robby! You will be awesome!

I love the lighting in these pictures especially the blue silhouette one Jill Jarrett. Keep em coming.

Stellar pics Robbie, thanks for sharing these brother!✌🏻

I need to hang out with Robby again!

AAAMMAZZIINNG Pics! 🙌📷👏👏 Huge Fan!!! 🤘🎸 (Here's a pic I took of you at one of Scott Medlock's Fundraisers at the Moorpark Country Club! It's my all time favorite that I've taken of you!😊)

Robby Kreiger so good to see you still playing and carrying the flame sir. I grew up listening to The Doors when I was a teenager in the late 80s and just getting into the psychedelic world. Your music was the soundtrack to that awakening. I wanted to take the opportunity to say a sincere thank you to being a part of what was a positive experience. Looking forward to hearing the session.

Jill Jarrett Your a master of so many priceless captures

Nice pictures Jill. I'm glad someone is carrying on the torch.🥰

Is there a link to the show? Thx.

Great photos, everything around Robby turns to gold, great vibe!

There are two ways to watch/participate:

1) Watch for FREE on YouTube using the following link, which will go live on Saturday: www.youtube.com/channel/UCOxG6tnS4OiOiPJEbUdRi-A

2) Download the Multiverse app on your iPhone, Android, or Oculus Quest. NOTE: There is an $8 fee to use the app. Once in the app, Reverbia Mainstage location is 3:45 & Esplanade, and the Earth Jam is 10 & G (these are street addresses on the app). I know this all probably sounds like gibberish, it’ll start to make sense as you explore the resources and the app.

If anyone is interested in joining the WhatsApp groups surrounding the event you can join through this link: chat.whatsapp.com/DXfakVHzi7542S5E2YCcAa

Once again, you can watch this on YouTube for free, but the app gives you a heightened experience and has interactives.

Hope to see you all on Saturday!

Thanks so much Robby for your FREE live streaming your music will never die.....and you know it!!!!!

Does anybody have a link to the actual video? Is it still up after having been broadcast live?

Robby has a burning desire to play- we atre the lucky ones. Thanks Robby!

Robbie... I have been teaching a guitar student a collection of songs by The Doors. I sing them well and really capture Jim's energy, spirit, aura, vibe, ambience & feeling. We are going to come to Cali and do a duo on the streets with 2 amplifiers. I literally played Love Street with him 20x yesterday as he forgets the chord changes. But I am drilling him until he gets in right. I am 46 and he is 62. We play 4 hours every Saturday. We also play Crystal Ship & Touch Me. I push him to do more like Love Her Madly, Break on Through, Love Me Two Times, Spy in the House of Love, etc.. I remember being 16 years old and being obsessed with the Doors and the Oliver Stone movie. Glad Ray put out the Soft Parade and explained that Oliver grossly distorted the good soul that Jim truly was when he was alive. Maybe someday we can jam. Love Light Peace.